You are here: Tree of Savior Overview » Classes » Monk 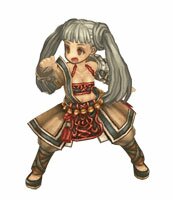 Most of its skills are influenced by Strength, so it may require some patience to grow Monk class.
“Iron Shirt” reflects enemies’ attacks without receiving any damages so it will be useful when Monk acts as a tanker in team plays. Monk uses mace as their main weapon. Fists are only used with skills and knuckle items does not exist in the game.

“Sunrays Hand” receives bonuses from the three stats, so when collaborating with other buff skills or other classes, its effect will be intensified.